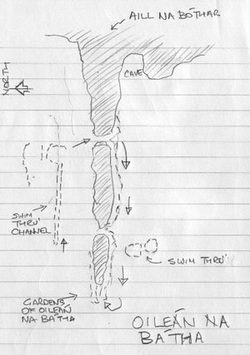 Kilkee Subaqua Club have been diving this reef officially since at least 1985, when we visited it in our newly acquired Lifeguard inflatable.   There were about 13 aboard including, what present-day politically correct terminology calls a “dry cox”,  and the one in question wasn’t in a jocose mood on the day in question either.   When the dozen divers were paired off and dropped overboard, weather conditions were quite pleasant, but when they began to surface, they found that the weather had greatly deteriorated, so that in the process of re-embarking the boat was taking a lot of water aboard with a fairly robust Southwesterly blowing up against us.   It didn’t help that one pair had to be pulled out of near-shore surf either and that had added to the poor cox’s travails.

The cox’n became agitated and wanted those aboard to get out, so that he could speed up and dispose of the water through the elephant trunk outlets- we were generally speaking quite inexperienced boatwise at this time and this was our first dive boat and probably its first major dive outing too.   There was quite a bit of confusion- people still being hauled aboard, water everywhere and some were complaining of seasickness and one thought he had the dreaded hypothermia.   Maybe those lectures were a bit severe back then- we highlighted all the horrible things, that could really mess you up and everyone harboured a personal set of worst fears as a result.   The petrol tank was actually afloat in the middle of all of this, restrained only by its umbilical to the engine and everyone was shouting something.

One of the hardiest of us suggested to me in a whisper, that we should dump some of the heavy gear and the fittest should snorkel ashore, as he didn’t know how much fuel there was and the weaker guys would have to be got back safely.   The cox’n was still shouting about getting out of the boat.   I was the mere club secretary and not renowned for physical prowess or derringdo, but I asked him, if the getting back in again would not refill the boat.   When he replied with some exasperation, as to what else could be done, I said ”Bail” and he said “with what?”.   That’s when I decided to do something.

“You, you, you and you, BAIL!- with anything- hands, fins, masks… just do it!.   You- look out ahead.   You- hold the petrol can and you there- mind him, he’s seasick; you- look after the hypothermia victim and you- drive!”   To my surprise it worked- they did as requested and we motored into the wind and the water level on board began to subside slowly.  My good friend with hypo soon jettisoned his lunch and turned a lesser shade of green and I crossed my fingers and wondered about the fuel, as one white horse after another broke drunkenly on the bow.   Then a particular film came to mind and we began to sing: “Let’s look on the bright side of life, uh um, let’s ….” And so on.   When eventually we round Georges Head and into Kilkee Bay, a great sigh of relief went up to the old gods of diving- (not the new mob!). 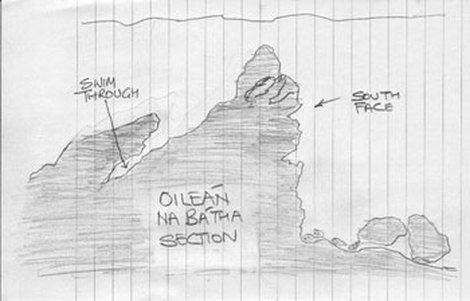 That was then and I don’t remember any more group outings there on that particular year, although a few of us returned in small numbers to dive it.  It’s a fine reef pointing directly Westwards with a watery gap or two between parts of it depending on tide level.   The name possibly means literally Island of Drowning, but in the vernacular something like “rock awash”, like you find in the Admiralty charts, i.e. a rock that gets submerged at high tide and is thus a danger to shipping.   The auld Gaels knew their stuff too.   I took the name directly off the ordnance maps’ form of Oirish- “Illaunabaha”- figured its meaning and popularised it- it was better than “that reef”.   The locals call the area Aill na Bóthar, but that refers to the twisted cliff formation behind it- it suggests maybe that it’s a cliff that cows fall off of sometimes.   I found these two pencil sketches in my old log book and hope they convey the layout and structure of the reef.

Anyway, there’s a cave on the south side near the cliff and the South face is mostly vertical and often sunlit.   There are a few rockfalls in parts creating a swim through here and there and plenty of niches for wildlife to rest and linger.   Among other items noted there I logged the largest conger I have seen- by comparison to my own length I reckoned 3.6 metres.   Maybe I imagined it though- he or she was stretched out full length under a deep overhang and I didn’t linger too long there.   Last year I saw a large tan-coloured lobster reclining with its two arms stretched out in front of its shelter in a rock- the body was not visible- and its arms from elbow to front were about as long as my own.   I tapped it, as there was no movement and it moved slightly, but was not in any way agitated, as the normal ones seem to get.   I had to leave it as my companion was on reserve.   Its colour suggests it had been pre-cooked.   A newspaper report I saw recently mentioned a species separate from the usual black or blue fitting its description.

There are one or two gaps at the upper level, where the sea swirls through this reef and there is generally plenty of life about these areas.   The North side is more sloping and barren, but with some pockets in the surface, again where crustaceans can be seen.   Some years back I had a nice experience there diving with Ger Haugh, our then D.O., swimming alongside a sizeable  electric ray in open water for quite a distance.

More recently Ger explored the North side and found a long swim through, where another rock formation overhangs the main reef creating a narrow varied split.   This runs up from 20 m to about 12 m  and can be a tight fit in places and you need a torch.   The first divers have a decided advantage, as things get cloudy behind them.   At its end there is a rectangular deeper enclosure with some overhangs, where fish congregate and a similar one again to the North.   On my first 2010 dive there in late September there were two Trigger Fish among the residents and three weeks later only a single one.   Turning South then you can cross the reef to the other side and descend.   If you do, be aware that you are on a potential deco seesaw, so be careful not to overdo things.

There is one other area worth seeing here, the sea (West) side of the reef at about 15 metres, which I call the Gardens.   The broken rock faces and splits there harbour an abundance of colour in plant and fish life and it’s a nice uplifting place to finish your dive after the barren depths beneath.   There are many other areas and features worth exploring there including some gigantic old rock falls with fine swim throughs.   The area tends to get swells, so exercise common sense in diving it.   On our second dive there in 1985 a good friend and I enjoyed the South face immensely in fine, clear conditions, our first real taste of this excellent site.   On coming up to the reef top at about 6 m, we noted the North side was looking mighty attractive too and down we did surely go.   I checked my watch and depth gauge and my trusty U.S. Navy Dive Tables and found we needed a seven minutes mandatory decompression stop at 3 m, so up we go.   He had never done a stop before and had no buoyancy aid at all and I had to hang on to him for the whole seven minutes, as we twirled round and round at 3 m in a mad marine tango.   We lived to tell (well, whisper) the tale, but it was a magnificent dive site then and still is.

AND ONCE MORE WITH FEELING, PLEASE.    In June of this year of storms and marine agitation I took a decision to do dry cox’n on a recent outing there.   The weather again was just a tad unruly and some memory or instinct must have clicked in- you don’t register these things until afterwards.   I was a little dubious about the choice of dive site in the uncertain weather outlook- the sea was lumpy from a southwesterly breeze, so to avoid problems extracting divers, it was suggested that they surface on the north side of the reef, where there would be relatively calmer water.   We dropped three pairs on the reef and with my female trainee cox’n, we hung off outside the area. 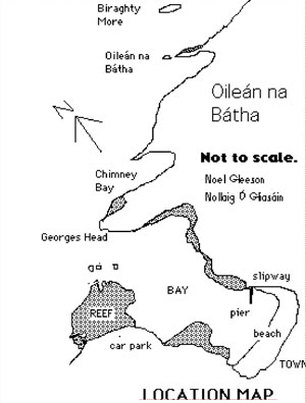 Of course, as these things usually work out, the weather began to get a bit more severe and there were a few strong gusts blowing up.   The first sight of emerging divers appeared by way of a surface marker buoy right in near the cave corner in agitated white water and our worst fears were realised.   “Oh, they’ll have to swim out- I’m not going in there” I heard myself say.   Three minutes on two heads appear and we shout from a safe distance, “swim out, swim out” and watch their progress, which was not inspiring, battling as they were against an unruly sea in a corner between reef and cliff, where all its force was channelled.

When one of them started to tow the other, I knew we had to commit and with the idea of towing them out with the boat’s painter, we went into the relative maelstrom- probably was much less than imagined, but right then it was definitely a maelstrom to me.   As it turned out, they were able to hang onto the side of the boat, while it reversed slowly against the battering swell behind and the craft filled with water.   “She can’t sink”, I think I said in answer to a somewhat frantic query, and bit by bit, we got a belt, then a bottle aboard, as we battled the oncoming sea in reverse and then the two of us got an arm each on the exhausted diver and he was secured.   Then his buddy, whose keep fit regime had saved both lives was secured and we turned and got out of this predicament.   Our trainee cox’n was excellent in coping with an emergency situation far beyond her previous experience and the divers involved had acquitted themselves well too.   All of us were a little drained by the experience and hopefully the better for it.    Fortunately, all the other divers surfaced on the prescribed North side and were easily recovered.   As we sailed for home singing “she’s only a maelstrom to me..”, it seemed we had just had a case of Déjà Vu- if I ever get my hands on a vineyard, that’ll be my tope- Déjà Vu, Premier Cru, Vin de Mer, Mis en Bouteille á Oileán na Bátha.
© Daniel Noel Gleeson 2011.